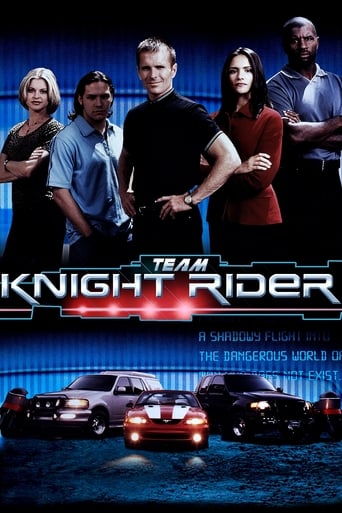 Team Knight Rider is a syndicated television series that was adapted from the Knight Rider franchise and ran between 1997 and 1998. TKR was created by writer/producers Rick Copp and David A. Goodman, based on the original series created by Glen A. Larson, who was an executive producer. TKR was produced by Gil Wadsworth and Scott McAboy and was distributed by Universal Domestic Television and ran only a single season of 22 one-hour episodes before it was canceled due to poor ratings. The story is about a new team of high-tech crime fighters assembled by the Foundation for Law and Government who follow in the tracks of the legendary Michael Knight and his supercar KITT. Instead of "one man making a difference", there are now five team members who each has a computerized talking vehicle counterpart. Like the original duo, TKR goes after notorious criminals who operate "above the law" – from spies and assassins, to terrorists and drug dealers. The final episode of the season, and series, featured the reappearance of Michael Knight, seen only from behind, at the very end.